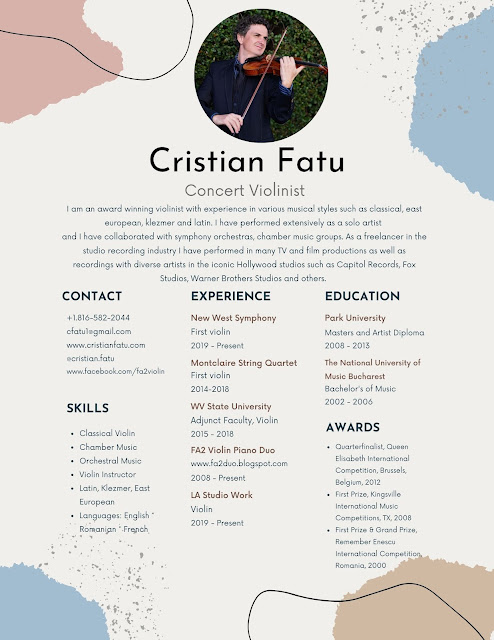 He has toured and performed at many prestigious festivals around the world including the Music Celebrations International, Carnegie Hall, New York City; the International Summer Academy Prag-Wien-Budapest in Austria; and the Kyoto International Music Students Festival in Japan, among others.The Murnauer Tagblatt in Germany praised his “wonderful virtuosity as well as perfect technique.”

Born into a family of musicians in 1983, Cristian began studying violin at the age four and made his debut at age sixteen in a performance of the Bruch Concerto with Bucharest’s National Radio Symphony Orchestra. Subsequently he appeared as a soloist with orchestras in Romania and the United States, including the Iasi Symphony Orchestra and the Kansas City Chamber Orchestra, among others. In 2001, the Romanian Union of Musical Critics awarded him its annual “Young Musician Debut” prize. Most recently he has performed with the Charleston Chamber Orchestra at Carnegie Hall, NYC and Kennedy Center, Washington DC where he premiered a West Virginia Violin Concerto by composer Matt Jackfert.

Throughout his career, Cristian has been afforded multiple opportunities to study and perform under the guidance of great masters such as Gil Shaham, Stefan Gheorghiu, Eric Rosenblith, Shmuel Ashkenasi and Vladimir Spivakov, to name a few. Following formative studies at the “George Enescu” Music Lyceum in Bucharest, Cristian earned a Bachelor's degree at the National Music University of Bucharest in Romania, a Master's and an Artist Diploma degree at Park University in Parkville, Missouri in the United States.

Chamber music has always been part of Cristian's life and he performs regularly in the FA2 Piano Duo with the Russian pianist Victoria Fatu - Martirosyan who also happens to be his wife. He is a past member of the Park Piano Students Trio where he served together with the 2009 London International Piano Competition Gold Medalist Behzod Abduraimov and award winning cellist Serafim Smigelskiy, member of the Tesla String Quartet. He has studied chamber music with members of Vermeer String Quartet, the Parker String Quartet and the Borromeo String Quartet.

Beside his performing career, Cristian is also a passionate violin teacher. Between 2015-2019 he taught violin at West Virginia State University. Previously he served as teaching assistant under Professor Ben Sayevich at Park University where his responsibilities included teaching applied violin to undergraduate performance majors and non-major students. He has also pursued other teaching opportunities such as violin instructor at St. Paul's Episcopal Day School in Kansas City and the Blue Lake Fine Arts Camp, Blue Lake, Michigan.

His debut recording in the United States titled From Bucharest to Kansas City (self-released) was described as "a sort of musical travelogue, telling the story of Fatu's own life-journey" in a review by the Independent of Kansas City. Other critically acclaimed releases include the album New Beginnings (Tzigane Music Label) with pianist Victoria Fatu – Martirosyan and most recently the album Treasures from Home featuring a wide and colorful collection of encore pieces.

Cristian is a single father and he has three children Vivienne, Mark and Sophie who at only five years of age became the youngest contestant in the history of NBC's America's Got Talent delivering memorable performances of Sinatra's top hits. In his spare time he enjoys photography, literature, high-tech gadgets and cycling.